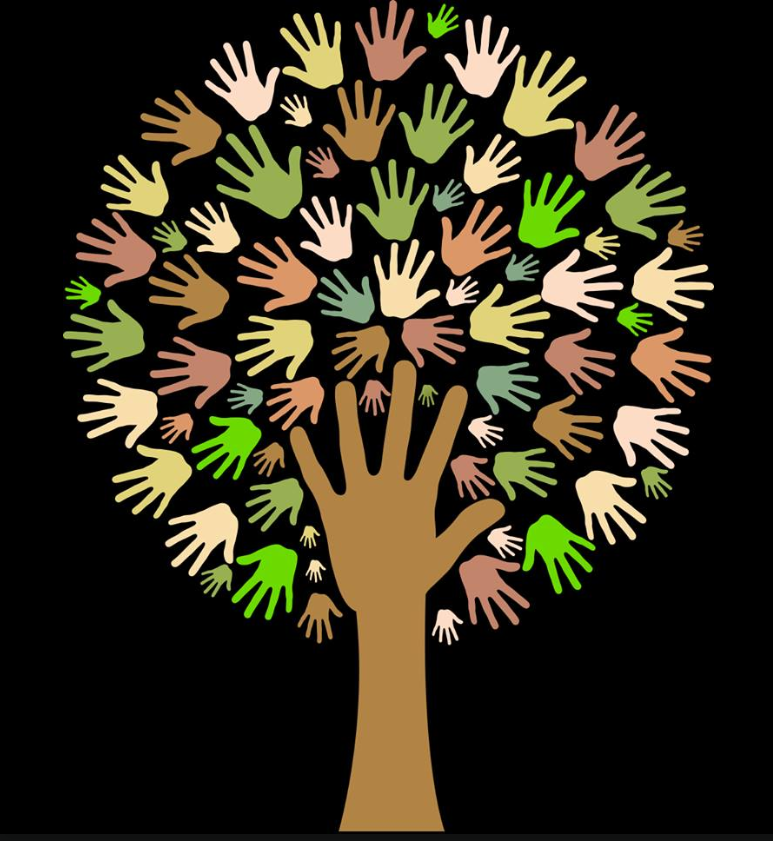 The mainstream environmental movement is under scrutiny for its homogeneity and increasingly called on to be more transparent about making large-scale commitments to change. In episode 11 of Think 100%, confront this dynamic and explore the solutions with special guest Whitney Tome, Executive Director of Green 2.0.

This is going to be a difficult but necessary conversation to pay attention to and act on in order for our movement to win on the critical issues facing our communities and planet.

On the show we’ll breakdown the movement’s diversity pipeline problem and the monolithic  policy implications as they relate to key components including philanthropy, academia, government, and nonprofits. We will also confront the myth that people of color lack interest in the environment, examine regulatory and legislative challenges, and explore how greater diversity in strategy and message can help the movement educate and activate a broader base of support.

In advance of the show, we recommend that you read the following articles:

Whitney has worked with fishermen, environmentalists, advocates, political strategists, government employees, and thought leaders to develop the approach and solutions needed for the problem. Combining her facilitation skills, knowledge of environmental issues, and understanding of people, Whitney is able to walk into any room, ask the right questions, develop a strategy in the moment and leave everyone with action items and tasks.

Prior to joining the Raben Group, Whitney served as the director of diversity and inclusion at the National Parks Conservation Association where she lead, defined and crafted metrics and measures for the organization’s diversity and inclusion efforts. Whitney has advised complex ocean stakeholder processes as a Program Manager and Mediator at the Meridian Institute including facilitating public meetings for regional ocean planning bodies that included state, federal and tribal partners.

At Environmental Defense Fund (EDF), Whitney served as a strategist, cat herder and trusted advisor in dozens of state and federal political campaigns. She also developed, launched and grew the Fisheries Leadership and Sustainability Forum – a partnership between EDF, Duke and Stanford. Whitney developed everything from the curriculum for fisheries managers to managing the steering committee, budget and partners for the Fisheries Forum.

In developing the Fisheries Forum. Whitney adopted a ‘soup to nuts’ management process. She developed the curriculum for and identified experts in fisheries science, law and policy to help educate federal fisheries managers. Her subtle, yet persuasive approach with fishermen, state and federal employees earned her respect. Within a few short years, due to Whitney’s continuous relationship building, and well-executed and informative events, the National Marine Fisheries Service asked the Forum to lead an entire sector of the largest conference in the United States focused on the reauthorization of the Magnuson-Stevens Act – Managing Our Nation’s Fisheries Conference.

Whitney earned a bachelor’s degree in political science from Middlebury College and a J.D. from American University’s Washington College of Law. She also won the International Chamber of Commerce’s (ICC) International Mediation Competition in Paris, France.

In addition to serving as Principal, Whitney is also the executive director for Green 2.0, an initiative to increase the racial diversity of the largest national environmental NGOs, foundations and federal government agencies.

We are 10 (!) episodes in to the Think 100% journey and I want to make sure you’ve noticed that we have some pretty powerful video clips up on our YouTube page.

Check out some of the highlights below and stay tuned for more at Think100.info. 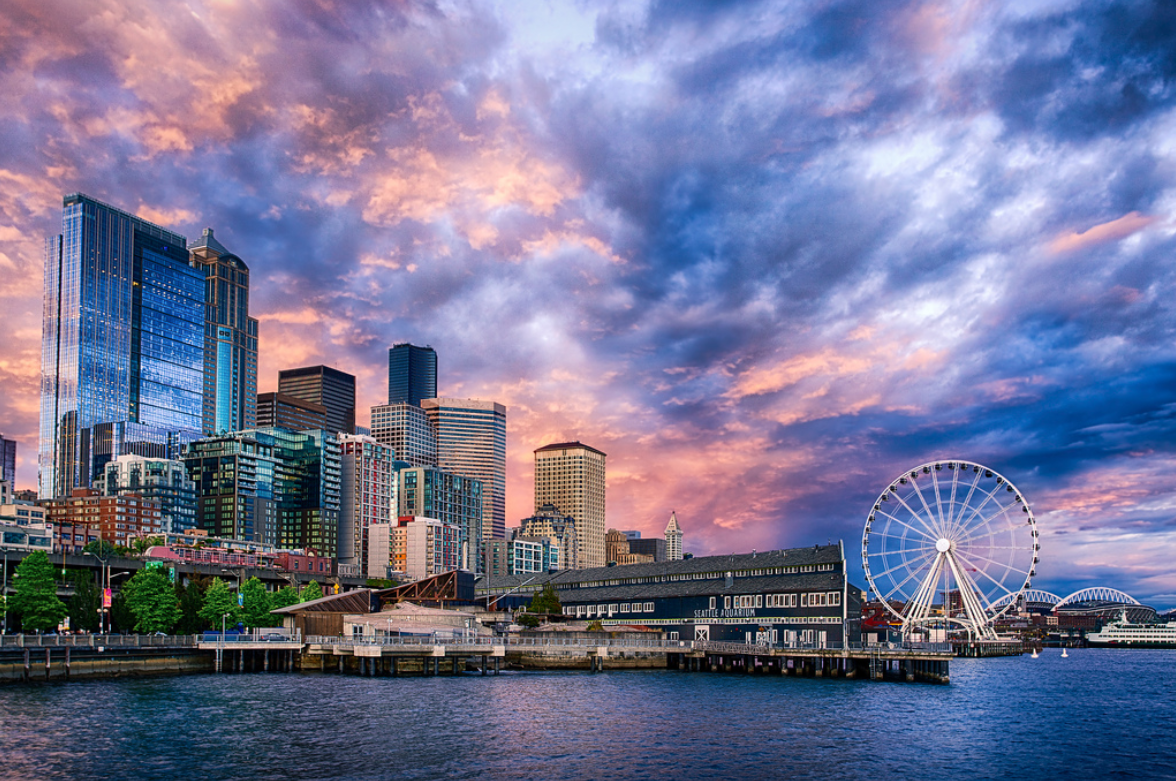 INSTANTLY LISTEN TO THIS EPISODE HERE!

In episode ten of Think 100%, United States Congresswoman Pramila Jayapal (WA-07) is joining us to discuss why she helped start the United for Climate and Environmental Justice Task Force and how her district is adapting to climate change. Also joining us is Rosemary Enobakhare, former Obama EPA official and current director of the Clean Water For All campaign. Rosemary has a wealth of experience building relationships with communities and is leading a coalition that is fighting off attempts to get rid of basic  clean water protections by the current Administration.

Congresswoman Pramila Jayapal represents Washington’s 7th District, which encompasses most of Seattle and surrounding areas. She is committed to ensuring that every resident of the district has economic opportunity; fairness and equity; and safe and healthy communities. She is proud of the district’s role in leading the country on issues like the minimum wage, racial equity and innovation, and will work to support that work and lift it up as a model for the rest of the country. She has a strong focus on ensuring income equality, access to quality and affordable education, expanding Social Security and Medicare, and protecting our environment for our next generations. As the first Indian-American woman in the House of Representatives, Jayapal has spent the last twenty years working internationally and domestically as a leading national advocate for women’s, immigrant, civil, and human rights. Visit her website to learn more.

Rosemary Enobakhare currently serves as the Clean Water for All Coalition Director. In this role, she is responsible for working with a broad range of partners to create and execute a Coalition that advocates and defends clean water protections at the Federal level. She was previously appointed by the Obama Administration to serve as the Deputy Associate Administrator for Public Engagement and Environmental Education in the Office of the Administrator at the United States Environmental Protection Agency (EPA). In this role, she led the agency’s community outreach program and developed strategic engagement plans to positively impact the EPA’s public policy to ensure nontraditional communities were both apart of the conversations and the solution.

Ms. Enobakhare also served as the Deputy Director of Public Engagement and Faith-based Initiatives, in this capacity she was over the coordination of outreach to the African American, faith, women and business communities on behalf of the EPA Administrator. Prior to joining the Administration, Rosemary served as the Director of African American Outreach for the Democratic National Committee, leading the party’s efforts around engaging the African American Community in the 2012 election. Rosemary is a native of Jackson, Mississippi and received her Bachelor’s Degree in Economics from Spelman College. 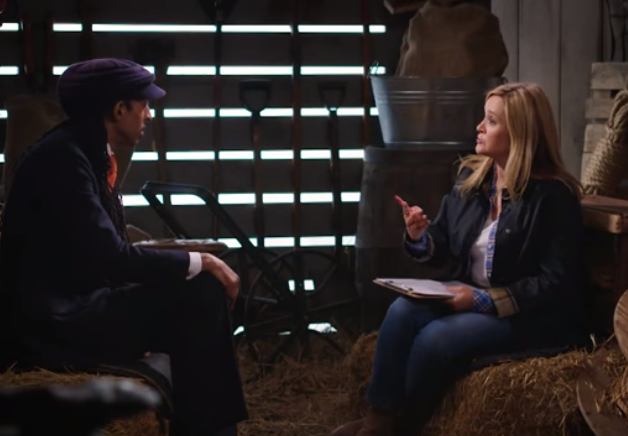 Mustafa Santiago Ali, Think 100% co-host and Hip Hop Caucus Senior Vice President, spent 24 years at the United States Environmental Protection Agency working to right wrongs, revitalize communities, and enhance programs that protect our health and planet. He recently sat down with the great Samantha Bee to discuss how the Trump Administration is taking actions that will disproportionately impact the poor and communities of color, and why the current leader of EPA needs to go. Like right now. Seriously. 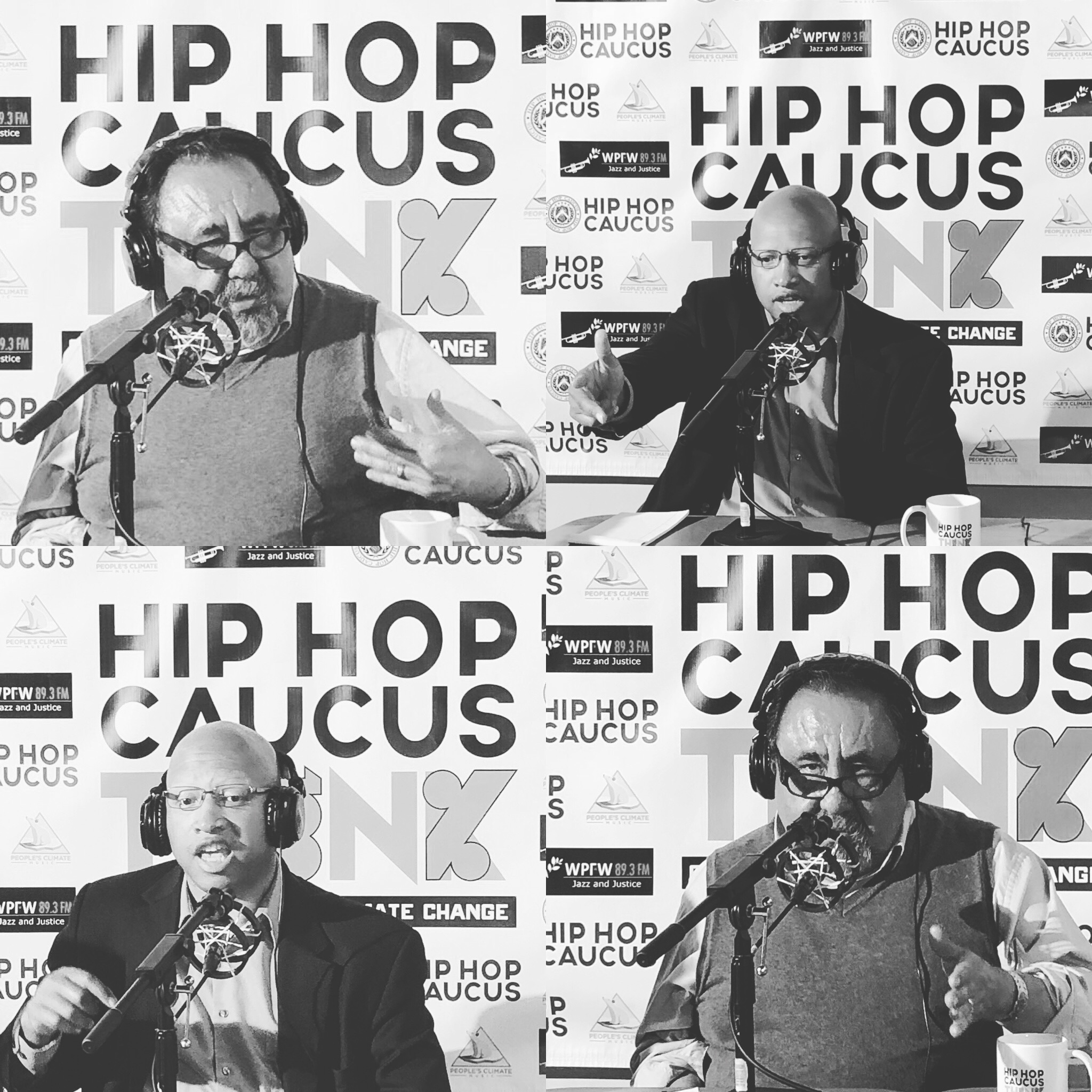 LISTEN TO THIS EPISODE HERE!

Our hosts Rev Yearwood and Mustafa Santiago Ali share some inspiring real-talk with United States Congressman Raul Grijalva (AZ-03), who for decades has been fighting for justice, equity, and accountability at home in the southwest and in the halls of Congress. The electrifying and Dr. Sacoby Wilson from the University of Maryland School of Public Health also drops by to discuss environmental justice, education, and science’s critical role in protecting our health, communities, and planet.
Broadcast Date: May 8, 2018
Broadcast Time: 6:00 pm ET / 3:00 pm PT
Stream: WPFWFM.org/radio
Live Radio: 89.3 FM in DC/Maryland/Virgina
Podcast: launching soon!

Raúl Grijalva began his career in public service as a community organizer in Tucson. Four decades later, he continues to be an advocate for those in need and a voice for the constituents of his home community. From 1974 to 1986, Raúl served on the Tucson Unified School District Governing Board, including six years as Chairman. In 1988, he was elected to the Pima County Board of Supervisors, where he served for the next 15 years, chairing the Board for two of those years. Raúl resigned his seat on the Board of Supervisors in 2002 to seek office in Arizona’s newly created Seventh Congressional District. Despite a nine-candidate primary and the challenge of being outspent three-to-one by his closest competitor, Raúl was elected with a 20-point victory, thanks to a diverse coalition of supporters that led the largest volunteer-driven election effort in Arizona.

Throughout his career, Raúl has always fought for underrepresented voices. The passions that drove him as a School Board member to fight for and succeed at implementing bilingual education in Arizona are the same passions that motivated him to help pass the first bond package containing a $10 million commitment to reinvest in older, poorer neighborhoods while he was a County Supervisor. Likewise, they are what drive him today as he fights to reform our broken immigration system, ensure livable wages for American workers, and create vital land protections to safeguard our nation’s natural treasures for the next generation. 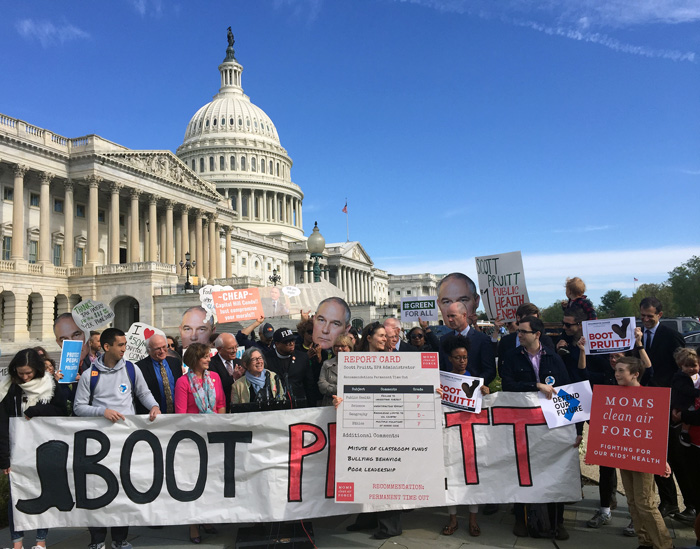 LISTEN TO THIS EPISODE HERE! 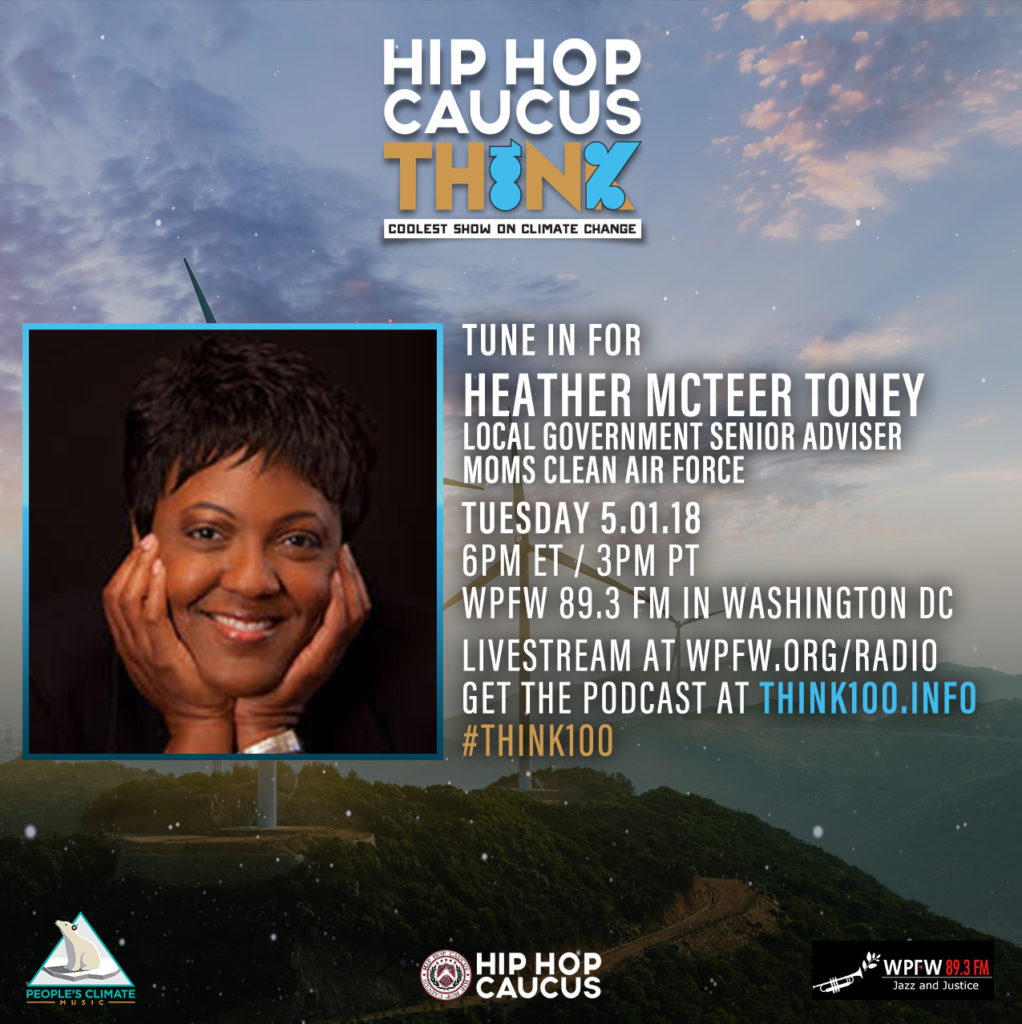 Heather McTeer Toney, Local Government Senior Adviser, Moms Clean Air Force: Heather served as the first African-American, first female and youngest mayor of Greenville, MS. In 2014, she was appointed by President Barack Obama to serve as Regional Administrator for Environmental Protection Agency’s (EPA) Southeast Region. Known for her energetic and genuine commitment to people, her work has made her a national figure in public service, diversity and community engagement. Heather works on local government policy initiatives and leads the Moms & Mayors program of Moms Clean Air Force. Heather holds a bachelor’s degree from Spelman College in Atlanta and a law degree from the Tulane University School of Law. She loves triathlons and bacon, and at any time can be found chasing her toddler or riding in old classic cars with her husband and daughter. 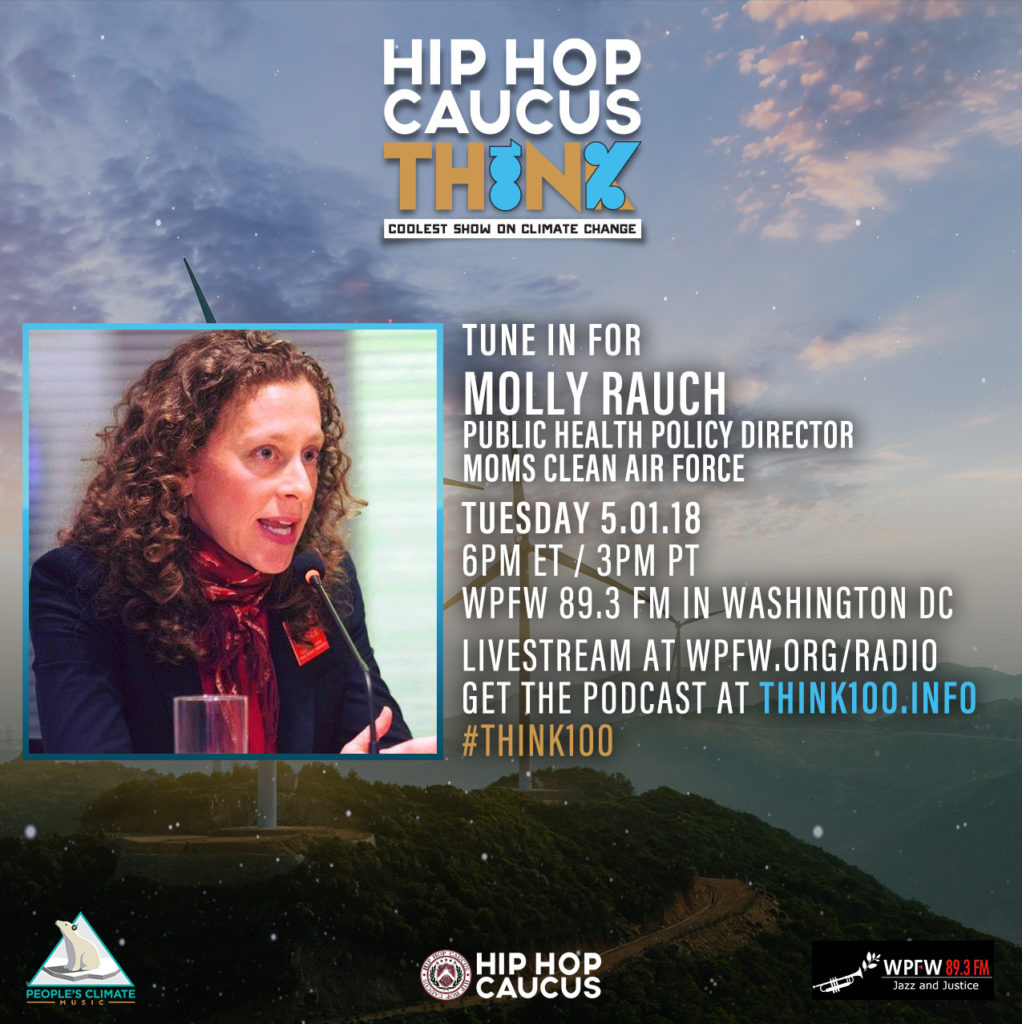 Molly Rauch, Public Health Policy Director, Moms Clean Air Force: as public health policy director, Molly develops clean air campaigns, creates educational resources, manages media outreach, cultivates partnerships and collaborations with other organizations, and writes about public health, science, and policy. She lives with her family in Washington, DC, where she serves on the District of Columbia’s Commission on Climate Change and Resiliency. Her writing on environmental health has appeared in Goodhousekeeping.com, Parents.com, and Huffington Post, among other publications. A native New Yorker, she holds a master’s degree in public health. 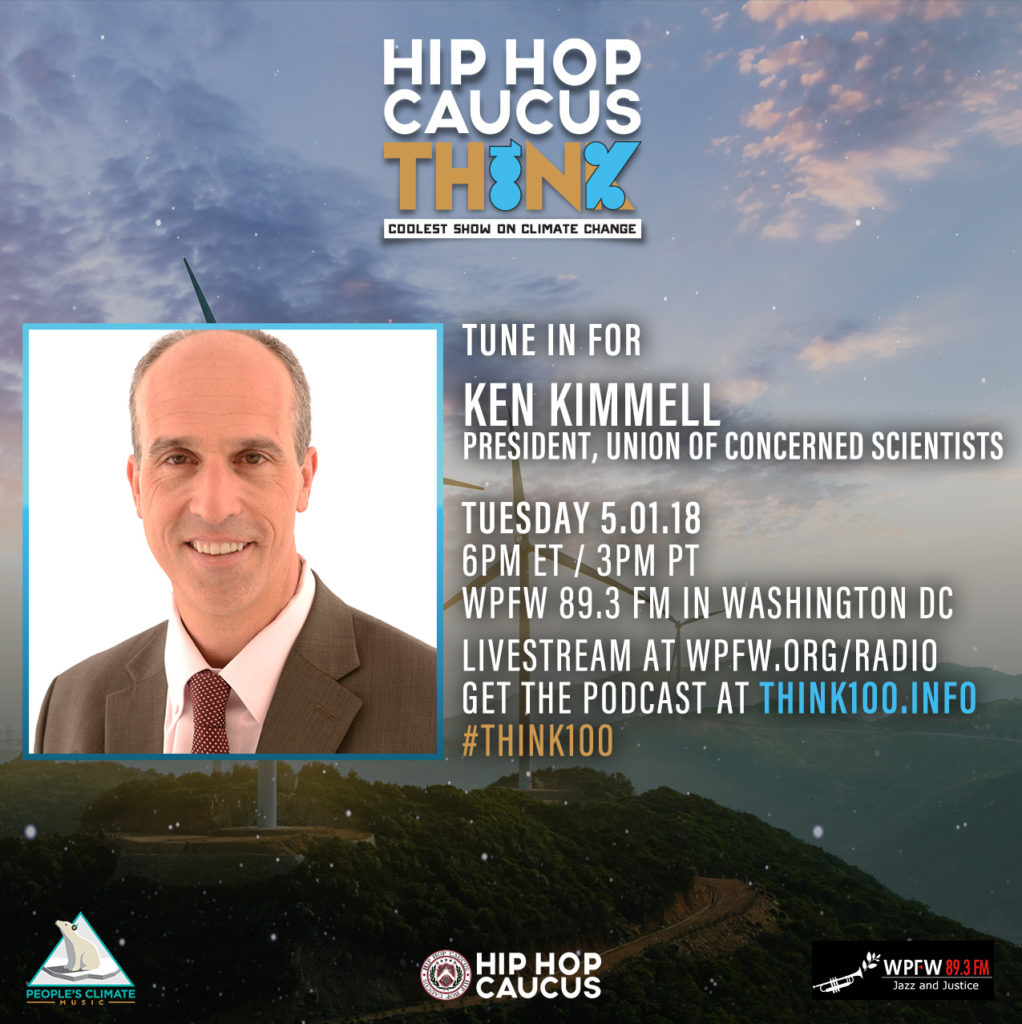 Ken Kimmell, President, Union of Concerned Scientists: Ken is president of the Union of Concerned Scientists, a leading science-based nonprofit that combines the knowledge and influence of the scientific community with the passion of concerned citizens to build a healthy planet and a safer world. Mr. Kimmell has more than 30 years of experience in government, environmental policy, and advocacy. He is a national advocate for clean energy and transportation policies and a driving force behind UCS’s “Power Ahead” campaign to build a large and diverse group of clean energy leadership states. [more about Ken] 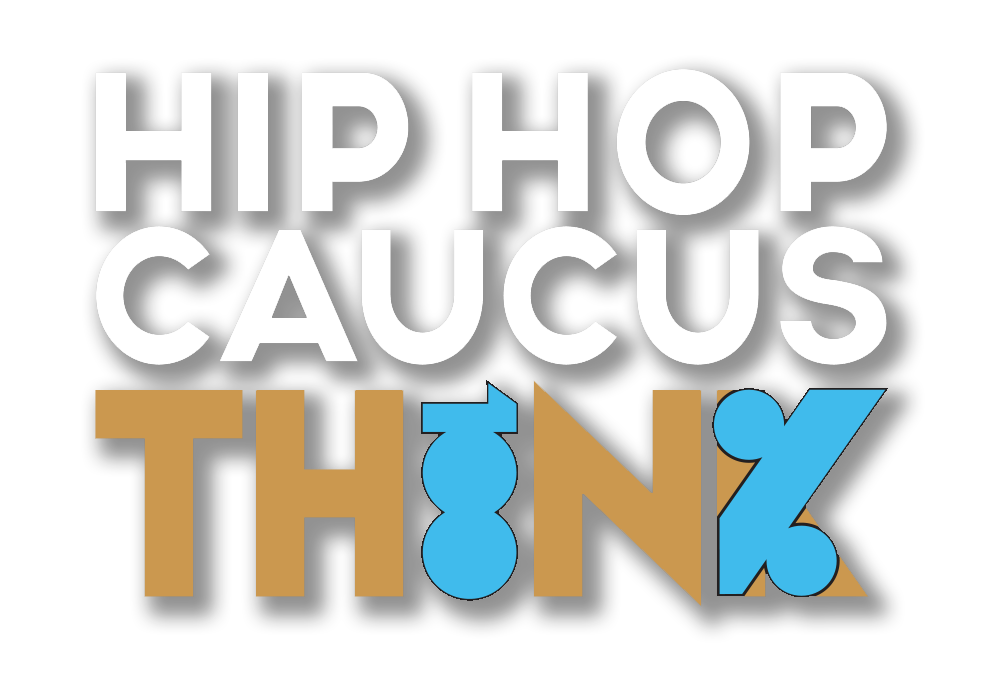