While we are being killed by police and vigilante violence, we are also dying a death of a thousand cuts by pollution in our lungs. Corporations poison our air and water, violate our rules and laws hundreds of times over. But we are up against a three strikes and you’re out justice system. One out of every three Black boys born today can expect to go to prison in their lifetime, but polluters never end up behind bars. These are the realities of injustice in our country that Jacqui Patterson, Director of the NAACP Environmental and Climate Justice Program, has been working to change for decades as a researcher, advocate, and activist. More at TheCoolestShow.com and @Think100Climate. #BlackLivesMatter #Think100 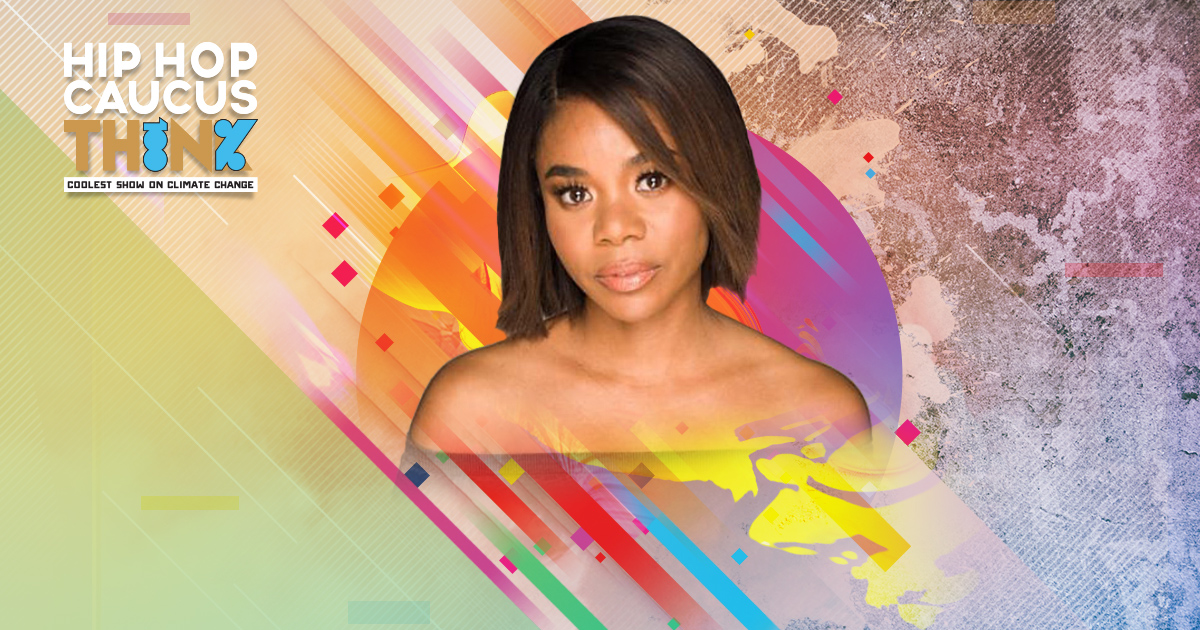 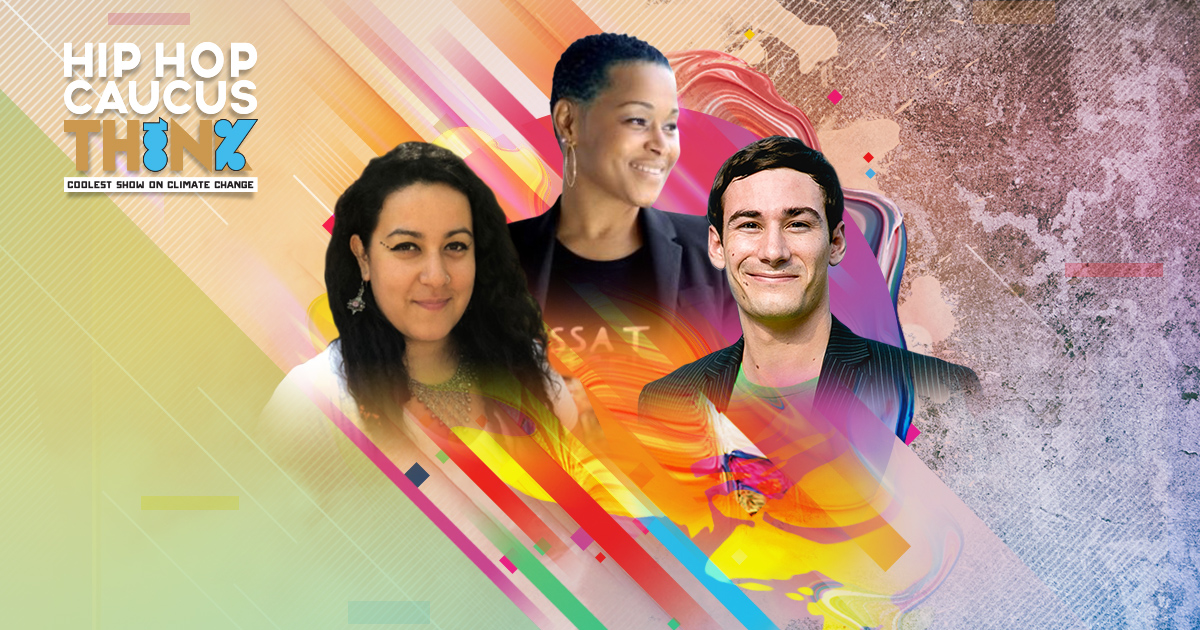 Local action is where it’s at! Think 100% goes on the road to host an inspiring conversation about local solutions following a film screening of Paris to Pittsburgh at the 2019 National Forum for Black Public Administrators ( NFBPA). The film from National Geographic tells the story of what climate change is doing to communities already, and what people, cities, and urban and rural communities are doing across the country to create and implement climate solutions. Guest host Brandi Williams, a Hip Hop Caucus leader from Charlotte, is joined by three young local climate leaders and activists, and event attendees for an in-depth discussion about implementing models of climate action and climate-justice.

Paris to Pittsburgh is a new film from National Geographic, produced by RadicalMedia in partnership with Bloomberg Philanthropies, and narrated by Emmy® and Golden Globe® Award-winning actress and activist Rachel Brosnahan. It tells the story of what climate change is doing to communities already, and what people, cities, and urban and rural communities are doing across the country to take action, all while the Trump administration denies climate change is happening. 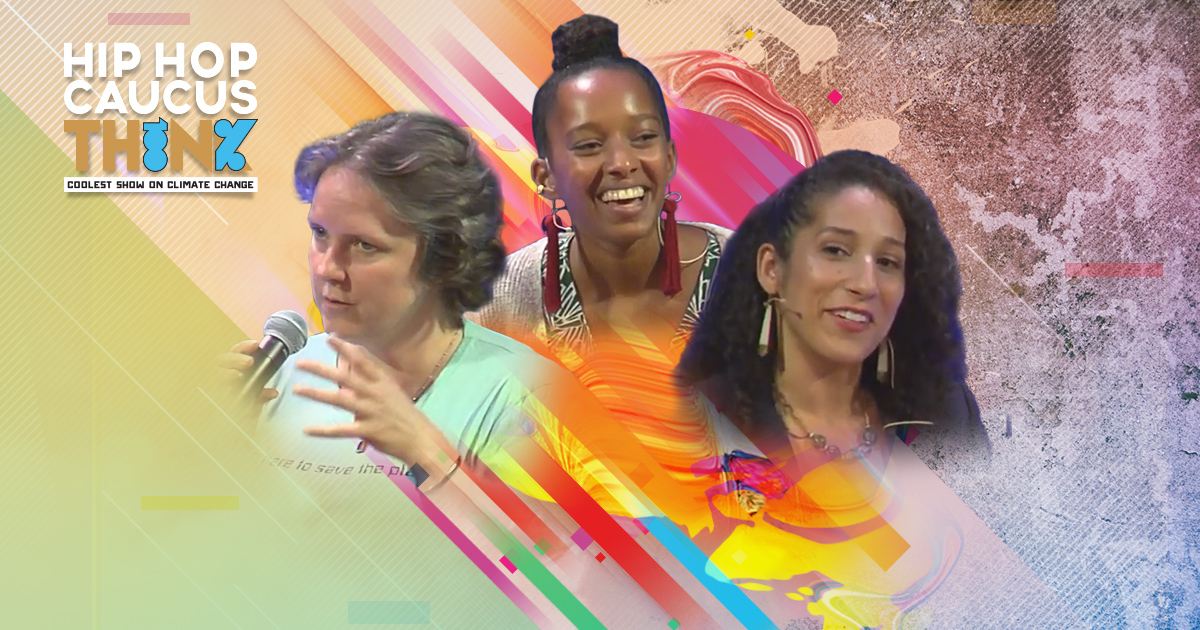 Women, people of color, and young people are leading the climate movement. Three leaders join Think 100% live at the 4th National Adaptation Forum in Madison, Wisconsin, to discuss how they’re working at the intersections of the climate crisis, building stronger communities through local action and just-solutions. 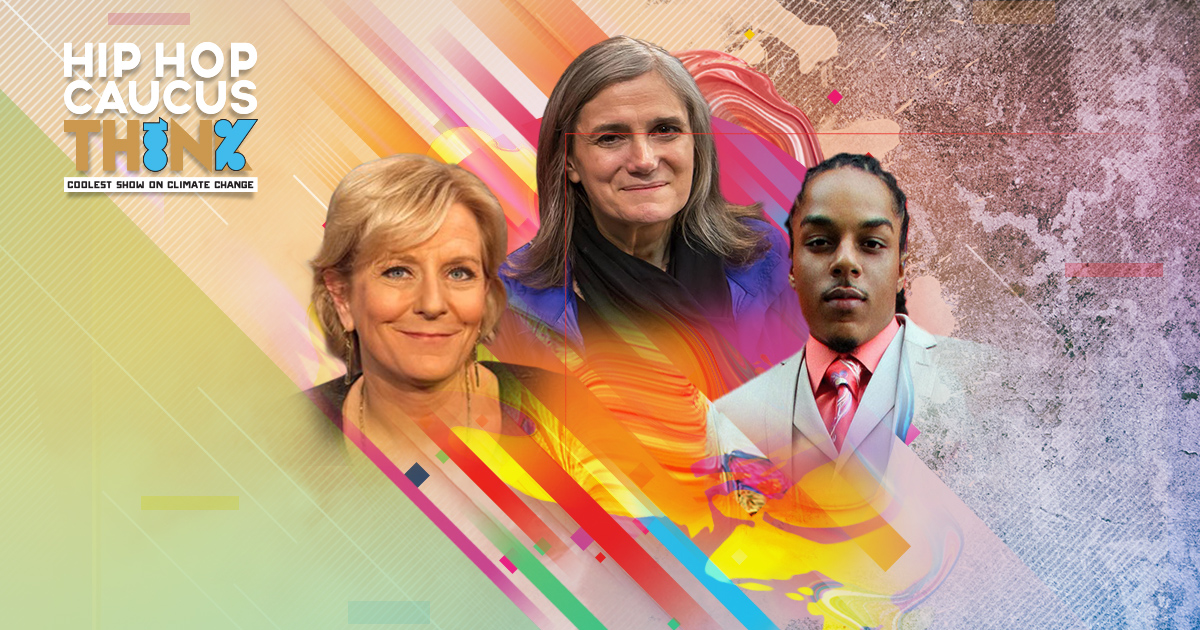 Amy gives us a deep-dive about how the media is reporting on the climate crisis and shares stories from the field, including having a warrant out for her arrest following her reporting at Standing Rock. Dr. Ellen Dorsey breaks-down philanthropy’s role propeling climate justice through investment that aligns with values, including divesting from fossil fuels and investing in a sustainable future. Messiah blesses us with some culture, performing powerful poetry. 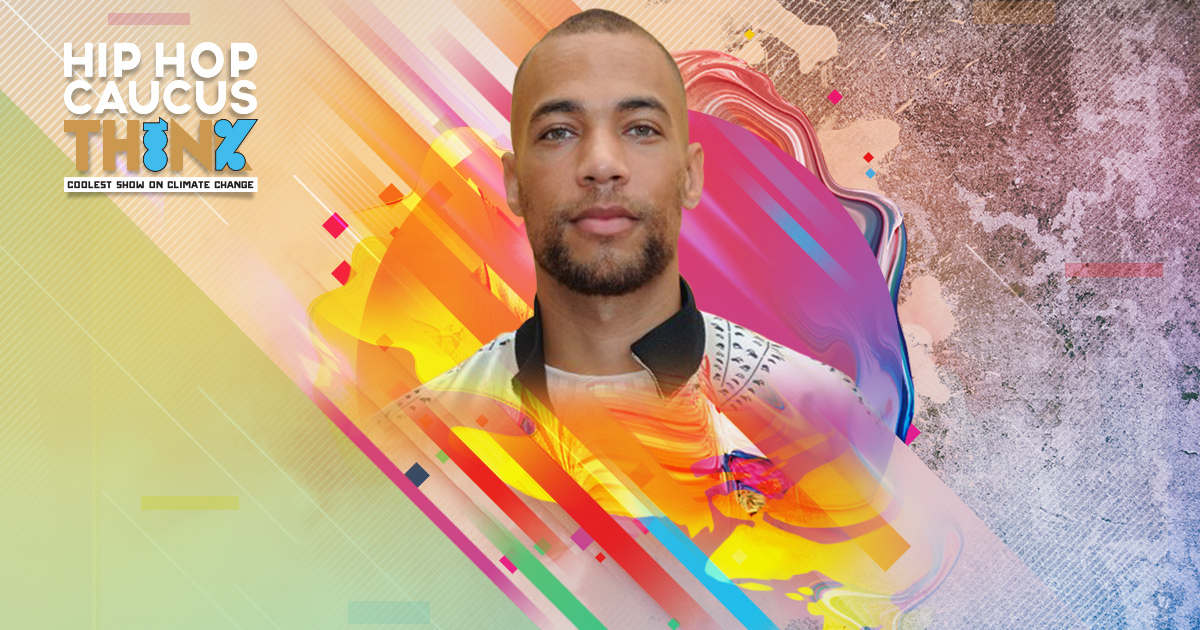 From being an artist, starring on such TV series as How To Get Away With Murder, Insecure, and The Vampire Diaries, to being a non-stop activist organizing for social and climate justice, Kendrick Sampson embodies “artivism”.  His experiences with Hurricane Harvey and Standing Rock impart the structural inequalities driving environmental racism and how we need all hands on deck to to rebuild our democracy.

Kendrick Sampson joins Think 100% cohost Antonique Smith to discuss the importance of “artivism”, how artists are using their platforms for activism, and the need to confront issues gridlocking justice and the climate crisis, including race, politics, and money.
Learn more about Kendrick’s organization BLD PWR at bldpwr.com and follow him on social media @Kendrick38. 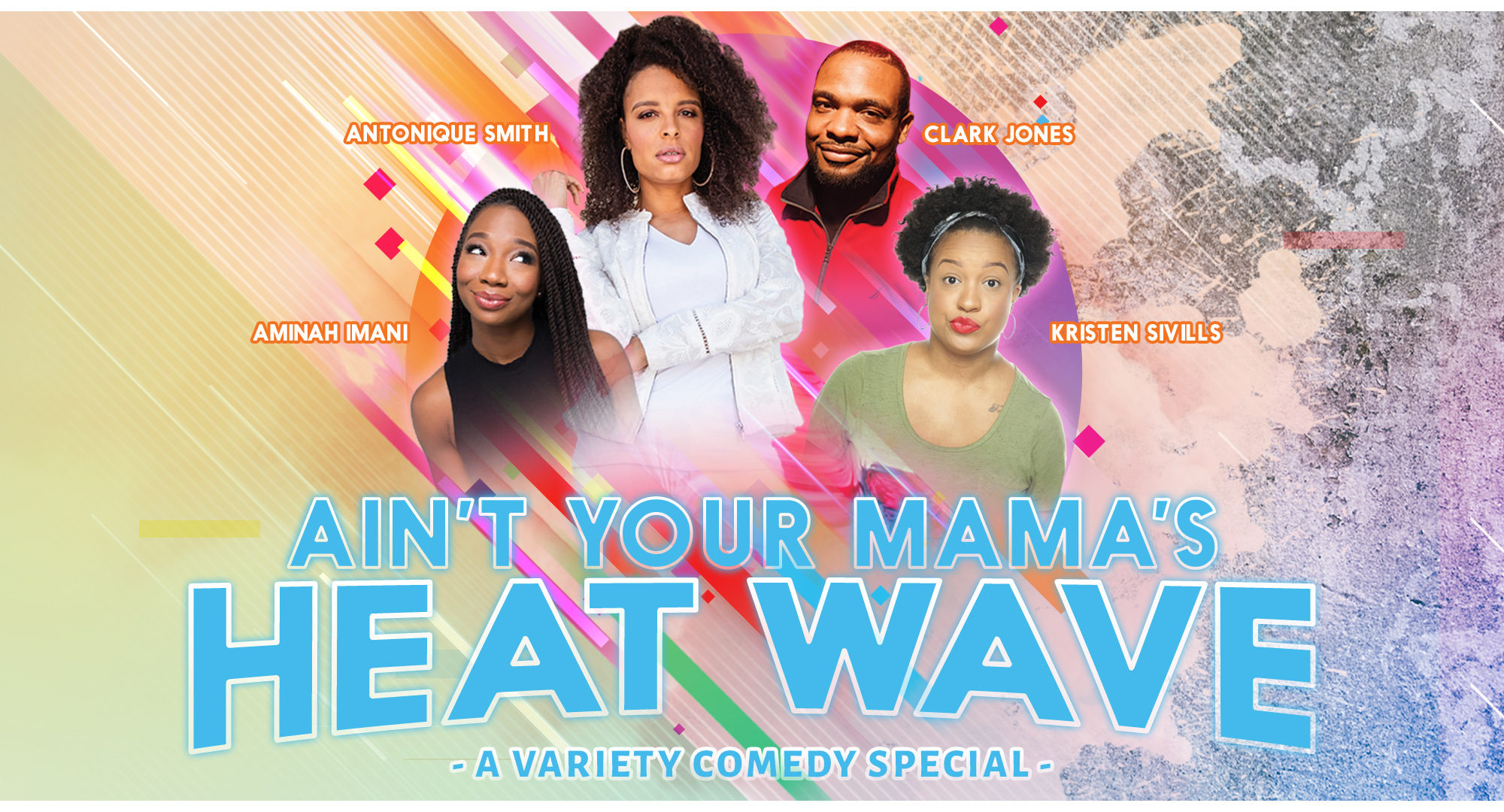 “AIN’T YOUR MAMA’S HEAT WAVE!” is a variety comedy show that will have you laughing, singing, and empowered to solve the climate crisis.

Performers and comics are coming from across the country —  including Los Angeles, New York, Chicago, and Atlanta — for this special night at the historic Attucks Theater in Norfolk, Virginia.

The first of its kind commentary on the climate crisis, the 2020 elections, intersectionality, and power building, that is young, black, and entertaining. Check out who we are bringing to Norfolk, VA

Antonique Smith – Grammy-Nominated Singer, as seen in Marvel’s Luke Cage on Netflix, and as Faith Evans in the film Notorious, co-host of Hip Hop Caucus’ Think 100% – “The Coolest Show on Climate Change”

RSVP at NorfolkWave.Eventbrite.com and help spread the word by sending the RSVP link (NorfolkWave.eventbrite.com) and flyer below to your friends, family, and network. This event is free and requires an RSVP due to limited capacity. Also be sure to dress to impress for on-camera and the red-carpet!

Follow @Think100Show and @HipHopCaucus on social media, where we’ll be sharing content leading up, during, and after the show (IG / TW / FB). 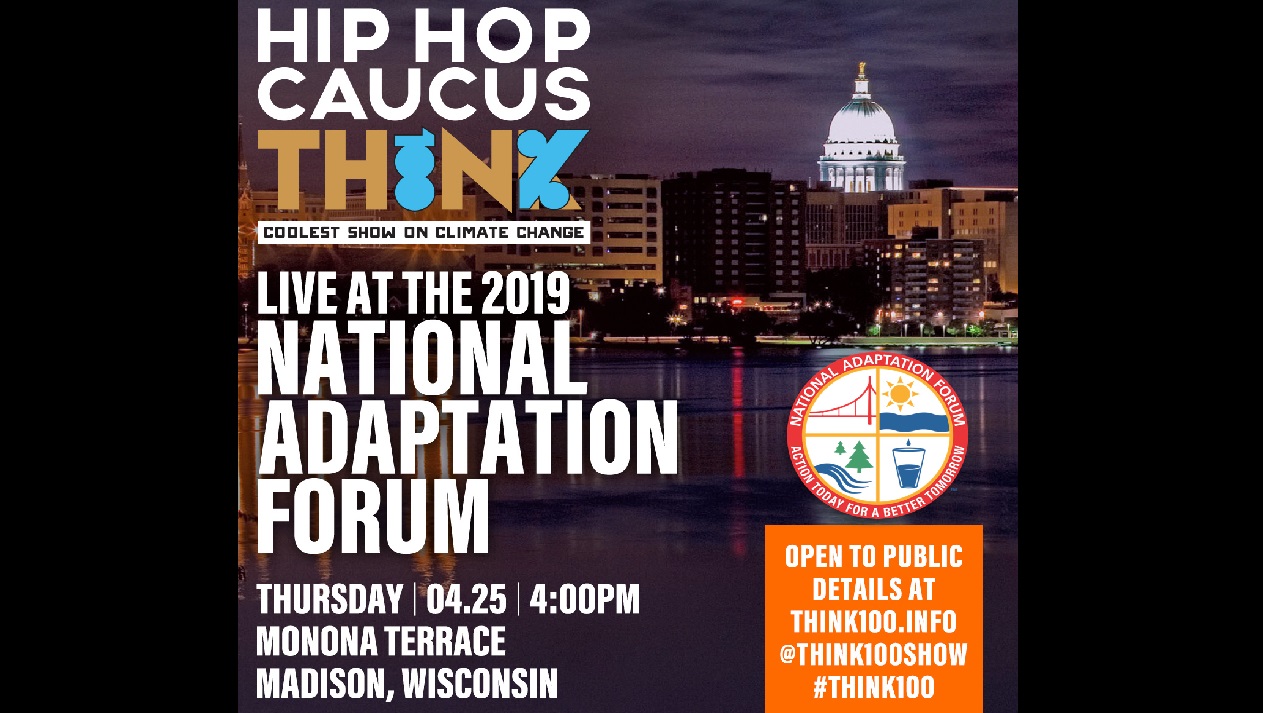 Get empowered at a special live episode of our award-winning Think 100% Show! This event is FREE and OPEN TO THE PUBLIC, so come out and join us.

As the closing event of the 2019 National Adaptation Forum, our hosts Antonique Smith, Mustafa Santiago Ali, and Rev Lennox Yearwood Jr., will be joined on stage by fellow movers and shakers taking on the climate crisis and environmental injustice.

Learn about the steps communities at the front-lines of climate change are taking to adapt and solutions that are building stronger communities and helping save the planet for future generations.

Documentary distributed by National Geographic tells stories of climate impacts and communities leading on climate solutions in diverse places across the U.S. This Earth Month grassroots screening series will inspire locally led action in 10 major cities across the country.

Paris to Pittsburgh is a new film from National Geographic, produced by RadicalMedia in partnership with Bloomberg Philanthropies, and narrated by Emmy® and Golden Globe® Award-winning actress and activist Rachel Brosnahan. The film brings to life the impassioned efforts of individuals who are battling the most severe threats of climate change in their own backyards and highlights urban and rural communities’ climate solutions.

“Communities of color and low-income communities are impacted first and worst by climate change. Paris to Pittsburgh does an excellent job telling diverse stories about both climate impacts on people and climate solutions people and local governments are implementing.,” said Rev. Lennox Yearwood Jr., Hip Hop Caucus President and CEO and Think 100% Show Co-host. “Everyone can play a role in solving climate change, and the film shows that there is hope in that. We are thrilled that through our Think 100% storytelling platform and our grassroots Leadership Committees we can share Paris to Pittsburgh with local leaders and influencers to educate and move more people to action. ”

The film’s title refers to President Trump’s statement when he announced his intention to withdraw the U.S. from the Paris Agreement, “I was elected to represent the citizens of Pittsburgh, not Paris.” The Mayor of Pittsburgh immediately countered that their city would stick to their commitments to do their part to meet the Paris agreement targets and hundreds of cities followed suit, signing the “We Are Still In” declaration.. Through leadership in states and cities, the United States is more than halfway to its Paris Agreement commitments despite federal inaction.

The free screenings will feature discussions sessions following the film and coordination of a collective action decided upon by the attendees to advance just-solutions to climate change in their local communities.

“Paris to Pittsburgh tells the stories of some the frontline communities who are grappling with the impacts of climate change, and more importantly, developing their own solutions,” said Antha Williams, head of Bloomberg Philanthropies environmental programs and consulting producer for Paris to Pittsburgh. “We are thrilled to partner with Hip Hop Caucus to bring these stories to new audiences and build an even stronger climate movement to protect everyone.”

The screening series kicked off on April 4th last week in Orlando with a live production of Think 100%: the Coolest Show on Climate Change at the National Forum for Black Public Administrators, where conference attendees watched the film and took part in an interactive panel discussion with Chris Castro, film participant and Director of Sustainability & Resilience for the City of Orlando; Michelle Suarez, Regional Director of Organize Florida; Robin Harris, a local climate and environmental justice advocate; and guest Think 100% host Brandi Williams, Hip Hop Caucus Charlotte Coordinator. The rest of the screenings will take place throughout April.

Find the dates, locations, how to RSVP, and more about the screenings series at Think100.info/P2P and follow @Think100Show and @hiphopaucus on social media for the latest from the series this month.

About Think 100% (Think100.info):“Think 100% – The Coolest Show on Climate Change” is Hip Hop Caucus’ award-winning multimedia platform that highlights solutions to climate change and environmental injustices, including a just transition to 100% clean energy for all. More at Think100.info and follow @Think100Show on Twitter and Instagram. 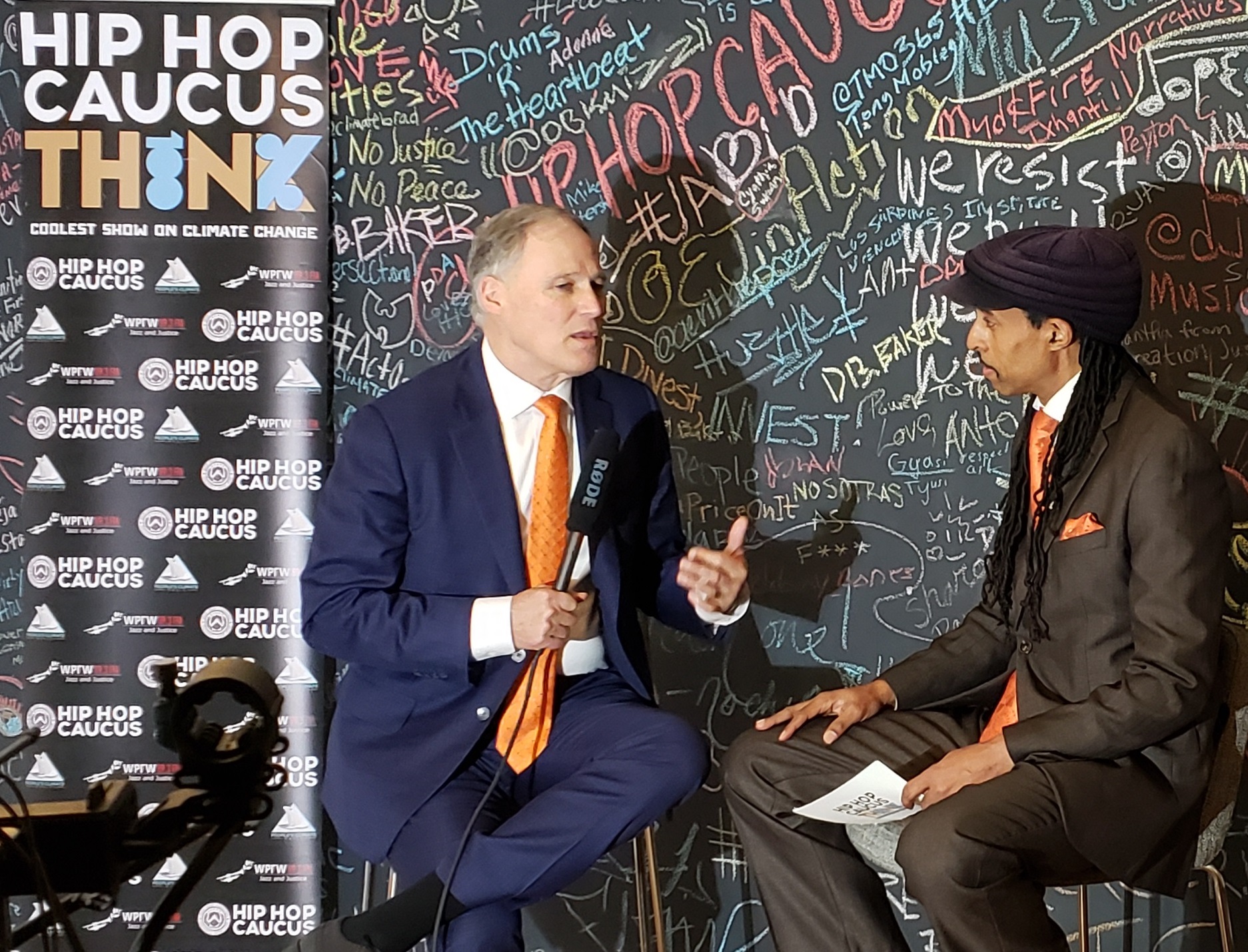 Governor Jay Inslee is running for President and joins the Think 100% Show to discuss why addressing climate change with equity and justice should be the top priority of our elected leaders.

Governor Jay Inslee (WA) is running for President of the United States with action on climate change as his number one priority. In this special episode of Think 100%, he sits down with our co-host Mustafa Santiago Ali to breakdown how he, as the Governor of Washington state, has put communities of color at the forefront of climate solutions and the need for diversity in the environmental movement.